You know you are spending too much time on a topic when you start seeing things.

This young man kindly took his time out from shooting, looting and burning to have his picture taken in front of the ruins of the Dreamland Theater on Greenwood, late morning of 1 June 1921.

The more I look at him, the more I think he looks like this guy: 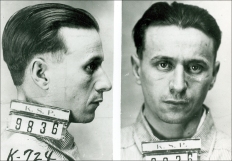 This would be Fred Barker, youngest son of the Barker Family, one of the founders of the Barker-Karpis gang in the early 1930s.  Fred was 19 and a half in June, 1921.  He and his brothers were members of the Central Park Gang in Tulsa.  He was first imprisoned in 1927 for burglary.  After teaming up with Karpis in 1930, he escalated to bank robbery, kidnapping, and murder.

The annoying part is that Fred was actually in Tulsa during the riot and could well have been involved.

Sadly, no way to prove it.

Cooking with the Carlsons

Learning to cook from the voices in our heads

the art that dignifies you